August 06, 2017
The club has obtained a shiny new (well, not really new, but fairly low time) Diamond DA-42 Twin Star.  I'd been telling myself that I was going to buy an hour in a twin engined aircraft to broaden my horizons a little and check off somethings on my New Years list.  The clubs previous twin was older than I am and had become a little temperamental in its advanced years.  The new aircraft promises a 21st century approach to multi-engined flying that in a lot of ways is both easier and harder to fly.

I wasn't particularly apprehensive prior to getting into it and flying it for two reasons.  One, I have a chunk of hours flying the Arrow which has retractable gear and a CSU.  The mindset behind flying it would come in handy, namely the sheer speed at which it gets through the air means mentally you have to be at least 10 NM ahead of it because you need to slow it down well before you arrive.

Here's what DA42 ZK-WGA looked like on the morning I flew her: 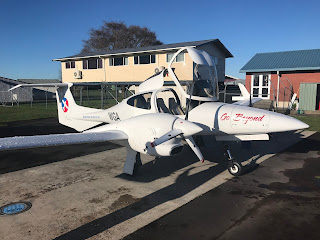 Those of you with keen eyes may notice the remnants of ice on the wing.  Well the overnight low was around 0 degrees C and I arrived at 0900 to find instructor Peter sweeping ice off the wings, and what you can see is the end result.  The temperature at the time was about 7 degrees C so while the ice was slowly melting in the morning sun it wasn't melting fast enough so we had to help it along.

This particular DA42 does not have de-icing equipment as standard because the club does not operate above the freezing level for lengthy periods and avoids flying into known icing conditions where possible so including it would have been an unnecessary maintenance cost.

What it does have is two fully FADEC (full authority digital engine control) Thielert TAE 125-02-99 aerodiesel engines running Jet-A.  The FADEC manages the engine output and propeller pitch setting with just one lever for each engine.  This automation equates to a huge reduction in workload because you simply tell the system how much performance you want (given in %) by increasing or decreasing throttle and it does the rest.

Peter and I strapped in and he handed me the checklist.  I found the prestart checklist and we started on page 1 (of 2).  This checklist set up the two Garmin G1000 EFIS for the flight (very important if we were going to be doing IFR but today we were VFR).  We had a slight hiccup because one of the screens wasn't showing the page we wanted but we found it eventually.  Full flap test,  electric trim test, fuel crossfeed settings,  the checklist went on and on.  Actually starting the engines consisted of hacking a stopwatch, turning on the fuel pumps, pressing a button to warm the glow plugs then once any warning lights were dealt with turning each key in turn to the start position.  Despite being a cold start on a cold day they both fired immediately and I was hit with the smell of unburnt Jet-A in the morning, it smelt like victory I was in a turbo prop.

Pausing to let the engines warm up, Peter grabbed the ATIS and then I released the brakes and started to taxi forward.  I was immediately impressed by two things,  one, the all round visibility is excellent, and two, the wing span was a lot longer than any aircraft I'd previously flown.  That caused me a few head on a swivel moments as we navigated our way between the fuel pumps and the parked aircraft and out to the runup area.

The runup was so easy it was almost disappointing.  Press two buttons for 8 seconds and watch for warning lights.  If no warning lights come up you are ready.  No need to runup each engine separately either.

We got our clearance to line up and Peter casually briefed me on the takeoff procedure:  feet on the brakes, set 100% power on both engines then feet off the brakes, keep it tracking straight,  let the airspeed hit 65 knots when there should be sufficient airflow over the T tail for it to be effective then ease back to 5 degrees nose up and she'd unstick at about 75.  Once airborne, select gear up, then flaps up and set climb power of 90%.  Once the gear came up WGA accelerated noticeably faster than anything else I've flown.  Peter said that 10 degrees nose up would give us a 100 knot climb speed so I set that the nose attitude and up we went.

Once we were clear I set course for Tauranga and reduced power to the cruise setting of 75% which would give us 140knots and 10 US gallons/hour fuel burn (by the way that's a total figure for both engines - this thing has almost the same fuel consumption as a 172!)  On the way I did some turns just to get a feel for it.  The controls are quite heavy in roll but that was to be expected for a high aspect ratio twin.  The aircraft seemed so well set up that the rudder seemed only to be there for fine tuning aircraft balance or for asymmetric training (and there is rudder trim as well).   The throttles have a very non mechanical feel to them,  but again that is to be expected since there are no cable linkages or any direct physical connection to the engine systems.  Again, having CSU means there is no requirement for a power adjustment when turning, you just move the stick and rudder and the FADEC does the rest for you.  It almost felt like cheating.

Peter made contact with Tauranga tower and got clearance into the circuit for a low approach and overshoot.  I'd wanted about an hour in the aircraft with no real plans to land anywhere except Hamilton.

On the way back Peter demonstrated just how cool the automated systems are, with the fully articulated autopilot flying via the GPS or old school with heading an altitude bugs.  You can even specify the rate of climb or descent.

All too soon I was making contact with Hamilton tower to get clearance back in for a landing.  Gear speed in this aircraft is 158 knots.  I blinked several times and re-read the placard just to make sure I had read it right.  Peter had recommended I set 55% power and WGA was indicating 135 knots at our nose attitude, well below gear speed. So select gear down, wait for 3 greens, there they are.  Airspeed comes back to around 110 knots.  Join downwind for runway 18L number 3.  Spot the traffic ahead.  We are below flap speed (I cannot remember what it is) so select the first stage.  Let the airspeed come back to 95 knots which will be our speed for finals.  Peter says to turn onto final a little earlier than I think as WGA has more inertia than I am used to.  I do a better job than I did in Tauranga (fortunately we had extended downwind so I had a lot of time to fix it).  Now I think I am a little high so I bring back the power to 35% and leave it there.  The PAPIs start to show 2 red 2 white so I bring up the power a little (I was fully eyes outside now so I can't tell you what I set) to catch the descent rate and keep WGA coming down.  Once we pass the runway extension I can land it so I round out nicely, and slowly raise the nose and reduce power to idle.  Without engine thrust the DA42 comes down and plants itself neatly on the mains.  I hold the nosewheel off for as long as I can and let it come down on its own.

And back we taxi to the club.  Peter asks me to refill the tanks with Jet-A.  For our 48 minute flight covering 90nm we used a grand total of 37 litres of fuel (yes that is both engines).  Welcome to the 21st century.

OK overall impressions.  It is an incredible piece of engineering.  I can't say if it is the easiest twin I have ever flown because I have only flown one, but I can definitely say it is easier to hand fly than the Arrow.  But it needs to be easy to fly.  It is designed to give budding airline pilots initial training in twin engined aircraft management, something they will be doing for a significant part of their career, so it also needs to have a level of systems complexity to it which it most certainly has.  So the emphasis will be on managing the flight rather than actively flying it.

Everyone has been asking me if I am going to get a rating.  Here's the final word.  No I will not get a rating in it.  Here's why:


So the next question I'm predicting is, would you get rated in it if you could?  Probably.  It was a blast to fly and really comfortable to fly in.  But that scenario is a long long way away from becoming a reality. 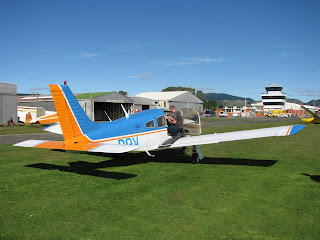 My friend, fellow pilot and blogger Chris finally completed his Arrow rating and enthusiastically invited me to join him on a "quick blat" over the countryside to somewhere and back. Of course I accepted, and on an impulse asked Chris if another friend, pilot and fellow blogger Aaron could come along. Chris didn't mind, so I send Aaron an invite and after not being sure he turned up at the Aero Club before Chris had arrived! We backed the plane out of its hangar just as Chris arrived. After a brief discussion and a look skywards our intended trip to Matamata was out and a trip to Rotorua was envisioned. Chris could only afford a short trip but Aaron (who is also Arrow rated) offered to fly the return leg. So after getting the weather information for Rotorua we clambered aboard and took off. The weather in Hamilton was calm with a light easterly breeze. Upon contact with Hamilton Tower we were instructed to use Grass 07 as it was into wind, but the Arrow w 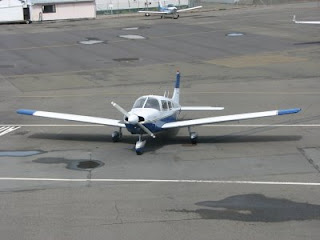 As part of a trip to Wellington, I hatched a plan to go up flying with another kiwi pilot and fellow blogger Rodney . The lovely Susan had managed to score us some very cheap tickets to fly to Wellington commercially (much cheaper than the price of gas for driving down), so around 10 weeks ago I had emailled Rodney and he thought it would be a brilliant idea to go up for a scenic flight around Wellington. Rodney kindly collected us from our motel and we turned up at the Wellington Aero Club , where Rodney flies from. Eventually our plane, an Archer which Rodney had booked for 10.30am arrived back from the previous booking and he got to work pre-flighting while I snapped some photos of our mount. Eventually we got strapped into our life jackets and taxied out onto runway 16 and with very little ceremony we were off! (Film to follow when edited) I had listened into the Wellington ATIS and the wind was pretty light but I was amazed at how smooth the flying conditions were. Remember